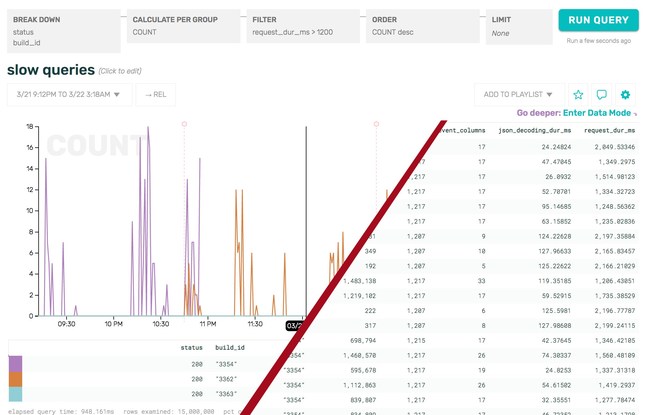 Honeycomb brings Business Intelligence like power to the engineers who build and run the software we rely every day to do things like order dinner and prepare our taxes--enabling them to understand exactly what's going on for every user at every instant.

The natural complexity of modern software, especially for platforms and SaaS products, is creating a growing class of problems that are extremely difficult to understand and solve. With many moving parts, as you have when using containers or microservices or frameworks like kubernetes, it's virtually impossible to predict all errors and edge cases. Layer on user behavior as an additional factor and it actually becomes impossible.

Charity Majors, co-founder and CEO, Honeycomb: "Existing tools are being mashed together to solve the observability problem in ways that simply don't work, because they weren't designed for this. Which is why you see a new monitoring or logging tool come out every month or so. Our needs, as engineers, are not being met."

Honeycomb draws on the founding team's experience building and running platforms relied upon by more than a million app teams, whose software in turn served tens of millions of end users. Their core insight is that engineers need to be able to interactively investigate what their software is doing and how it's reacting to the pressures of usage–without needing to have predicted ahead of time what questions they would be faced with today.

Charity Majors: "Most engineering teams face endless cycles of downtime, fragility, burnout, lost revenue, and focus diverted from core business objectives. To break out of this pattern, we need a new approach to understanding what our software is actually doing.  Scrolling through dashboards of canned metrics or slowly searching through logs isn't enough. Honeycomb makes adding a new observation as easy as adding a code comment and asking new questions as easy as, well, asking."

"At Munchery we love cooking and bringing real, authentic food to your doorstep. Honeycomb helps us keep our systems glitch-free so we can focus on crafting delicious meals instead of worrying about application latency or database bottlenecks. No other way to spin it, we're stuck on Honeycomb!" - Cyrus Fakour, VP of Engineering, Munchery

"After spending 10 years at Google I thought I had a good handle on the different techniques to see what is going on with services.  But Honeycomb changes the game by supporting fast exploration over high cardinality data. It has super powers over traditional monitoring." - Joe Beda, founder and CTO, Heptio

"Honeycomb gives us the ability to understand every aspect of our system in a data-driven way, and allows us to evaluate our system from basically any angle. Usually only large companies have the luxury of a tool like Honeycomb." - Alexander Wange, founder and CEO, Scale

"Honeycomb gives me power to explore performance I never thought I'd get outside of Facebook" - Cory Ondrejka, founder and CEO, Mori and former Facebook VP Mobile Engineering

About HoneycombHoneycomb provides full stack observability—designed from the ground up to debug live production software, consume event data from any source with any data model, and make collaboration a central part of problem solving. Founded on the experience of debugging problems at the scale of millions of apps serving tens of millions of users, we empower all engineers to run, debug, optimize and truly understand their own production software.

Companies like Docker, Munchery, Nylas and more rely on Honeycomb to solve the hard problems that arise from operating a modern software stack with event driven debugging.

Combined with new enhancements to its machine-assisted BubbleUp tool, users are able to precisely identify where to focus precious engineering time to quickly solve problems ...